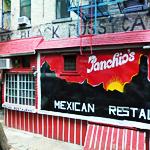 By skyeye @ 2011-06-08 17:11:13
@ 40.729919, -74.001359
New York, New York (NY), US
Panchito's Mexican Restaurant has just painted over "The Fat Black Pussycat" lettering on the facade, resulting in a firestorm of protests from preservationists and fans of sixties music. In the early nineteen-sixties, the legendary club played host to performers including Mama Cass Elliot, Tiny Tim, Bill Cosby, Richie Havens and Shel Silverstein. Some biographies of Bob Dylan credit the theater as the location where he penned his 1962 hit “Blowin’ in the Wind.”
Links: www.wsj.com
598 views