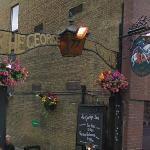 By kkeps @ 2010-05-22 18:32:26
@ 51.504443, -0.090483
Southwark, United Kingdom (GB)
The George, or George Inn, is a public house established in the medieval period on Borough High Street in Southwark, London. Currently owned and leased by the National Trust, it is located on the south side of the River Thames near London Bridge. It is the only surviving galleried London coaching inn. The first map of Southwark (Duchy of Lancaster ca 1543) clearly shows it marked as 'Gorge'. It was formerly known as the George and Dragon, named for the legend of Saint George and the Dragon.
Links: en.wikipedia.org
479 views