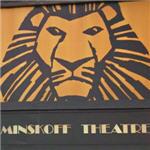 The 1,621-seat venue, designed by architects Kahn and Jacobs, is on the third floor of One Astor Plaza, an office tower constructed on the site of the legendary Astor Hotel. Named after Sam Minskoff and Sons, builders and owners of the high-rise building, it opened on March 13, 1973, with a revival of Irene starring Debbie Reynolds. Over the years it has served as host to musicals, dance companies, and concerts.
Links: en.wikipedia.org
913 views