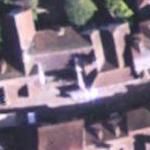 By kkeps @ 2011-08-03 12:54:49
@ 50.950051, .731465
Rye, United Kingdom (GB)
The Mermaid Inn is a Grade II* listed historical inn located on Mermaid Street in the ancient town of Rye, East Sussex, southeastern England. One of the best-known inns in southeast England, it was established in the 12th century and has a long, turbulent history. The current building dates from 1420 and has 16th-century additions in the Tudor style, but cellars built in 1156 survive. The inn has a strong connection with the notorious Hawkhurst Gang of smugglers, who used it in the 1730s and 1740s as one of their strongholds: Rye was a thriving port during this period. Some of the smugglers, their mistresses and other characters are reported to haunt the inn.
Links: en.wikipedia.org
2,310 views