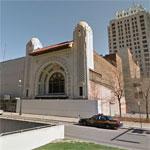 The polychrome terra cotta facade is its most spectacular feature, with a large arched window, resembling a triumphal arch, and two minarets on either side, once topped by gilded domes.

The interior could originally seat over 2,200, and featured a large stage and simple but graceful decor.

Within a few years of its opening, it switched from vaudeville to movies, and by the 1940’s and 1950’s, had become a burlesque house.

Since its closing, the National Theater, like so many of Detroit’s old movie houses, has fallen into serious disrepair, both inside and out. Its facade still looks majestic, though, despite its boarded-up entrance and decrepit marquee.
Links: historicdetroit.org
380 views