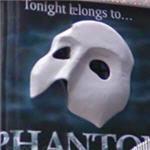 The music was composed by Lloyd Webber, and most lyrics were written by Charles Hart. Additional lyrics were written by Richard Stilgoe. Alan Jay Lerner was an early collaborator, but withdrew due to illness after some initial work on a single song, Masquerade. The central plot revolves around a beautiful soprano, Christine Daaé, who becomes the obsession of a mysterious, disfigured musical genius.

The Phantom of the Opera opened in the West End in 1986, and on Broadway in 1988. It is the longest-running musical in Broadway history after overtaking Cats in 2006, and the second-longest-running West End musical.
Links: en.wikipedia.org
684 views