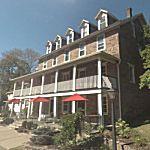 By Parabellum @ 2009-10-09 10:16:33
@ 40.583344, -74.957846
Pittstown, New Jersey (NJ), US
The Pittstown Inn, in various incarnations, has been hosting residents and travelers since the 1760's. The Inn was originally called Hoff's Mill, named for an early founder of the area now known as Pittstown. The Lawrence Hoff farm was a large holding, which included the property where the Kingwood Presbyterian Church now stands. Pittstown was known, in fact, as Hofftown in the 1700's. The name was changed during the revolution to honor William Pitt, Earl of Chatham.

In those days, the local tavern served as an informal Town Hall and community center. Local taverns like the Hoff's Mill Inn also served as stagecoach stops, mail delivery points, and lodging for travelers.

The tavern was reopened in 1800 by Moore Furman. Furman had purchased most of the village prior to the Revolution. He was Deputy Quartermaster General for the Revolutionary Army and used Pittstown as his supply depot. During the war, Pittstown was important in furnishing supplies to General Washington.
Links: www.pittstowninn.com
556 views