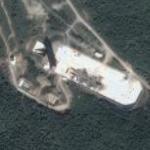 By mlc1us @ 2009-06-05 11:27:51
@ 39.659921, 124.705816
Changya-dong, Democratic People's Republic of Korea (KP)
North Korea has been quietly building the new facility, which is capable of launching ICBMs, for nearly a decade. It represents a major step forward for its long-range missile program because the facility would allow multiple test flights in a short time, which is difficult at the smaller long-range missile launch site known as Musudan-ni on its east coast.
Links: en.wikipedia.org
12,654 views