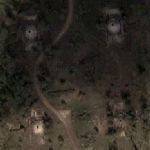 By ElMagnifico @ 2008-03-31 17:18:17
@ 56.550424, 24.343815
Iecava, Latvia (LV)
Abandoned Missile Silo Complex: Of course, the breakup of the Soviet Union was followed by a significant nuclear disarmament leaving deserted silos scattered about the Russian countryside. The particular complex shown in the image above is located in Latvia and contains four silos as well as a central command and technical support bunker. Now decommissioned, some such silos are open for public tourist visitation.
Links: www.flickr.com
7,528 views