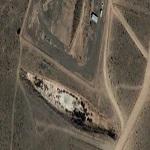 By qstone @ 2013-12-08 11:46:07
@ 33.076696, -106.182856
Tularosa, New Mexico (NM), US
It has been rumored that this large ship like formation near White Sands, New Mexico missile testing range was a replica of the World War II ship, "The Bismark." However, after watching the Travel Channel's, "America Declassified," it turns out this large object is actually a berm to shelter observers from exploding ordnance during missile testing. Looking at the object from the satellite image, does resemble a large ship in the middle of the New Mexico desert.
Links: www.tapatalk.com
8,564 views