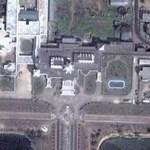 By DonMartini @ 2007-05-21 04:12:59
@ 23.837358, 91.282858
Agartala, India (IN)
Ujjayanta Palace, standing in the heart of the city, is a famous royal house, covering an area of one sq. km.. Styled in Greek sculpture, Ujjayanta Palace was built by Maharaja RadhakishoreIan Manikaya in 1901 at a cost of 10 lakh of rupees. The palace is set with the huge lughole style gardens, adorned by pools and fountains, the superbly tiled floors, curved wooden ceiling and exquisitely crafted doors. The three storeyed mansion has a mixed architecture with three high domes(the centre one being 86' high). Its well laid out gardens have two large tanks on either side and the fountains are laid out in the patterns of the Mughal gardens. The palace is floodlit at night.

At one time the Ujjayanta Palace was situated 10 km away from the city. But, as a result of the devastating earthquake in the year 1897, the castle had been destroyed, and latter on rebuilt at the heart of the city. On all sides of the palace complex several temple complex has been developed. The temples are of Lakshmi-Narayan, Uma-Maheshwari, Kali and Jagannath. These are the place which tourist in large numbers.

The castle is now a Assembly House of Tripura. The newer attraction of the palace is Musical Fountain or Dance of Fountain in tune with music.
Links: www.north-east-india.com
518 views