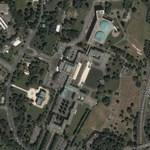 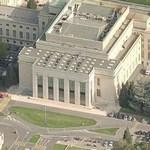 Today, and after the completion of a new wing in 1973, it is the second most important centre of the United Nations after New York.

Its surface is that of the Palais de Versailles and its Assembly Room, seating 2,000, is as large as the Paris Opera House.

Over 25,000 delegates meet here annually to negotiate for world peace.

Many works of art and gifts are displayed.
Links: en.wikipedia.org
1,896 views