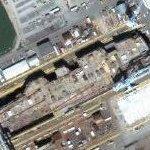 She is the second United States aircraft carrier to be named after a naval aviator (Forrestal was the first). Other naval vessels named for aviators include frigates McClusky and Thach, and destroyer Massey, all named for aviators who commanded formations in the Battle of Midway. While still a Nimitz class ship, George H. W. Bush differs significantly from her predecessors, even more so than the differences between CVN 68-70 and CVN 71-76.