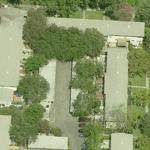 By kkeps @ 2010-09-15 18:51:25
@ 34.01972173, -118.36083309
Los Angeles, California (CA), US
The Village Green is a condominium complex in Baldwin Hills, a Los Angeles neighborhood. It is located between Rodeo Road and Coliseum Street, west of La Brea Avenue. The complex was built in 1942 as one of the most ambitiously planned communities in Los Angeles at the time. The complex, which encompassed 627 units, was designed by the firm of Wilson, Merill & Alexander in the "garden city" style. The units seldom have more than two bedrooms, and tend to attract seniors and younger professionals as residents. As one of the first such establishments, the Village Green was also designed with the requirements of car-owners in mind.

It was declared a National Historic Landmark in 2001.
Links: en.wikipedia.org
644 views