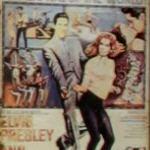 The film is regarded by fans and by film critics as one of Presley's best movies, and it is noted for the on-screen chemistry between Presley and Ann-Margret.

Elvis Aaron Presley (January 8, 1935 – August 16, 1977) was one of the most popular American singers of the 20th century. A cultural icon, he is commonly known by the single name Elvis. He is often referred to as the "King of Rock and Roll" or simply "the King".
Links: en.wikipedia.org
777 views