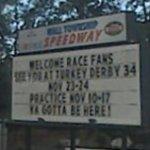 Under new promoter Jim Morton, the speedway lived on with races in 2009 and 10, but Morton had to back out in September 2010 due to a lack of money.
Links: en.wikipedia.org
586 views