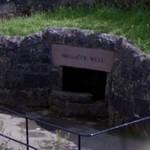 
Sir William Wallace (Born around 1270, died 23 August 1305) was a Scottish landowner who became one of the main leaders during the Wars of Scottish Independence.