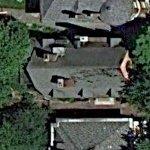 For Warren McArthur, Frank Lloyd Wright designed the McArthur House of 1892. It is one of Wright's so-called "bootleg" houses; a two-story house with Roman brick halfway up the first floor exterior, and a Louis Sullivan style arched main entrance. This was among the houses that led to Wright’s dismissal from Sullivan’s employ
Links: www.flickr.com
1,182 views