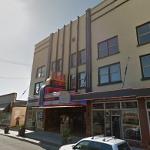 The original seating capacity was 1500. There is a large stage and 2 floors of dressing rooms. There was also a large pipe organ that accompanied the silent films. Vaudeville was the original main entertainment at the D&R.

The lobby had 2 large chandeliers and more murals with wicker furniture on the mezzanine level. The original exterior had a metal cornice on the top of the building, a simpler marquee and a box office built into the lobby between the entrance doors.

The original box office was on the outside of the theater but was built into the wall between the entrance doors like the 7th St theater. The current box office is actually the 3rd one to grace the theater. The current marquee is also the 3rd one. The original was quite simple, but there was a verticle blade sign running down the front of the building and there were no verticle stripes on the front.

During the 1930's the theater was remodeled, all the boxes were removed the plaster ornamentation was reduced and the whole building in and out was painted. The marquee was replaced and the versicle stripes seen on the outside today were added. During the 1940's the seating was replaced on the main floor, now about 1200.

The whole interior and exterior was again re-painted and the marquee was again replaced with the one that appears today. The box office was also replaced with the current free standing one we see today. Nothing much happened with the theater except lobby paint up to the closing in the 1980's.
Links: www.dandrtheater.com
696 views