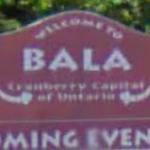 By kkeps @ 2013-04-18 19:42:40
@ 44.99953, -79.59702
Bala, Canada (CA)
It is considered one of the hubs of cottage country located north of Toronto. Thus, its year-round population of several hundred is increased by thousands of seasonal residents and weekend day-trippers during summer months. It is known as the Cranberry Capital of Ontario, as the province's largest cranberry farms, Johnston's Cranberry Marsh and Wahta Iroquis Growers, are located nearby. It was once the smallest incorporated town in Canada, until amalgamation as part of Muskoka Lakes Township.
Links: en.wikipedia.org
469 views