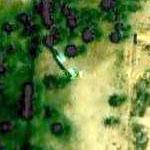 By Pdunn @ 2006-03-04 14:50:47
@ 33.803511, 42.414576
Haditha, Iraq (IQ)
This is on the far outskirts of the Al Asad Airbase. When the Australian Special Forces captured Iraq's second largest airfield, they discovered dozens of flyable Iraqi aircraft that had gone undetected by coalition planners. The aircraft were hidden everywhere, from dry riverbeds, to groves of date palms — everywhere but within the base itself.
693 views