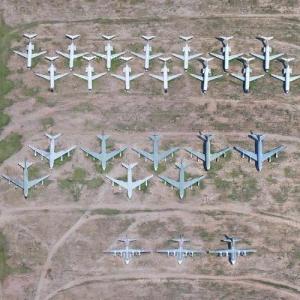 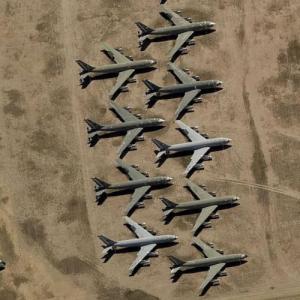 By nic @ 2005-04-10 18:15:12
@ 32.17357284, -110.84712494
Tucson, Arizona (AZ), US
"The Boneyard" in Tuscon, Arizona is Davis-Monthan Air Force Base. It stores numerous retired aircraft, and since World War II has become one of the largest aircraft storage facilities in the world, chosen because of the area's low humidity, meager rainfall, hard alkaline soil, and high altitude which allows aircraft stored here to be naturally preserved for cannibalization or possible reuse. The geology of the desert allows aircraft to be moved around without having to pave the storage areas.

The base was named in honor of pilots Samuel H. Davis and Oscar Montana, both Tucson natives who fought in World War I. In 1927, Charles Lindbergh and the "Spirit of St. Louis," fresh from the nonstop crossing of the Atlantic Ocean, dedicated Davis-Monthan Field, then the largest municipal airport in the United States.


With the end of World War II in 1946, operations at the base came to a virtual standstill. It was then the base was selected as a storage site for hundreds of decommissioned aircraft, with the activation of the 4105th Army Air Force Unit and the base became known as "The Boneyard" when more than 600 B-29 Superfortresses and 200 C-47 Skytrains had been moved to Davis-Monthan in May of that year. Some were preserved and returned in the next conflict, the Korean War (a 1950-1953 war between North and South Korea, in which a United Nations force led by the United States of America fought alongside South Korea against China and the North with the backing of the Soviet Union), others were scrapped.

Today, Davis-Monthan is the location of the 309th Aerospace Maintenance and Regeneration Group (AMARG), which is the sole aircraft boneyard and parts reclamation facility for all excess military and government aircraft. Aircraft from the Air Force, Navy, Marine Corps, Coast Guard, NASA and other government agencies are processed at AMARG, which employs 550 people, almost all civilians. The facility also converts old fighter jets, such as the F-4 Phantom II and F-16, into aerial target drones. The base's typical inventory comprises more than 4,400 aircraft.
Links: en.wikipedia.org
38,068 views