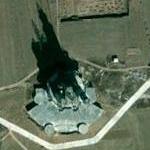 By kkeps @ 2011-12-27 13:08:16
@ 40.236946, 116.163737
Beijing, China (CN)
Wonderland is an abandoned 100-acre amusement park on the outskirts of Beijing. Originally designed to be the largest amusement park in Asia, construction stopped in 1998 following financial disparities with local officials, while a 2008 attempt to start construction again also failed. The site, which features a number of abandoned buildings, is being reclaimed by local farmers.

The abandonment of such a massive construction project has raised concerns about the existence of a property bubble in China.
Links: en.wikipedia.org
3,928 views