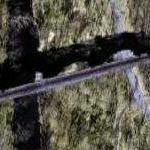 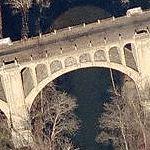 Paulinskill Viaduct (aka Hainesburg Viaduct) used to be part of the Erie Lackawanna Railroad system, which threaded a scenic route from Lake Hopatcong to Pennsylvania and was abandoned sometime during the early 1960's. This immense 115-foot-high bridge was constructed between the years of 1908-10; it consists of seven looming concrete arches spanning 1,100 feet, high across the woods and the river below. Upon it's completion in 1911, it held the record for the world’s largest railroad reinforced concrete viaduct. [lostdestinations.com]
Links: www.lostdestinations.com
2,003 views