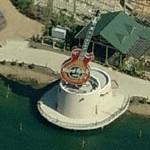 May 23. 2009 it reopened under the new name Freestyle Music Park but closed down again after the 2009 season.
Links: en.wikipedia.org, www.flickr.com
898 views