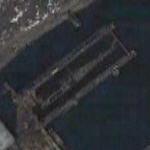 On 12 August 2000, the Russian Oscar II class submarine Kursk sank in the Barents Sea. The generally accepted theory is that a leak of hydrogen peroxide in the forward torpedo room led to the detonation of a torpedo warhead, which in turn triggered the explosion of up to seven other warheads about two minutes later. This second explosion was equivalent to about 2-3 tonnes of TNT and was large enough to register on seismographs across Northern Europe. However, alternative theories have been proposed.

Despite a rescue attempt by British and Norwegian teams, all 118 sailors and officers aboard Kursk died. A Dutch team later recovered the wreckage and all of the bodies, which were buried in Russia.
Links: en.wikipedia.org
2,071 views