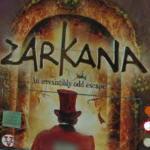 By kjfitz @ 2011-11-13 10:30:40
@ 40.757765, -73.985651
New York, New York (NY), US
Zarkana is a touring arena show produced by Cirque du Soleil that will play in both Radio City Music Hall in New York City as well as the Grand Kremlin Palace in Moscow. Zarkana will also tour in other cities, although it will be seasonal in New York City and Moscow. The show began previews on June 9, 2011, at Radio City Music Hall and premiered on June 29, 2011. The show will be a reinvention of the variety show, with a story about a magician in an abandoned theatre who has lost his love and with her, his magic has disappeared. As he cries and begs the Gods for her return he is plunged into a world inhabited by surreal creatures.

Zarkana is a fusion of the words "bizarre" and "arcana". The name refers to the strange aura and atmosphere of this place and its inhabitants.
Links: en.wikipedia.org
421 views