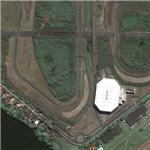 Construction is due to begin in 2013 and be completed in 2015. The four courts are expected to cost about $46 million.
Links: en.wikipedia.org
830 views