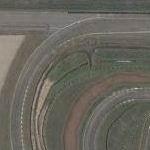 It'll be modified due to the Pan American Games taking place there in 2007 and fell off the MotoGP schedule because of this. It also hosted a few CART races in the late 90's.
Links: www.riogp.com.br, en.wikipedia.org
1,169 views