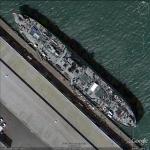 The San Francisco Brewers Guild will presents its seventh annual Brews on the Bay Beer Festival on September 11th and 12th from 1:00 to 5:00 p.m. The event takes place aboard the SS Jeremiah O'Brien, the historic World War II Liberty ship docked at Pier 45 in San Francisco.

Proceeds from the festival will be donated to the organization that maintains the SS Jeremiah O'Brien which made seven ocean voyages and eleven crossings of the English Channel during WWII and is one of only two Liberty ships still sailing.
Links: drinkbaybeer.com
477 views