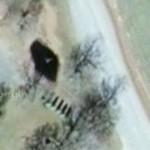 During the European leg of the Damage Inc. tour in support of Master of Puppets, the band complained that the sleeping cubicles on their tour bus were unsatisfactory and uncomfortable. To decide who received pick of the bunks, Kirk Hammett and Burton drew cards.

On the evening of September 26, 1986, Burton won the game with an Ace of Spades, thereby getting the first choice of bunk and pointed at Hammett and exclaimed "I want your bunk!" Hammett replied "Fine, take my bunk, I'll sleep up front, it's probably better up there anyway". Burton was sleeping shortly before 7 am on September 27 when, according to the driver, the bus skidded off the road (the E4, 2 miles north of Ljungby), and flipped onto the grass in Ljungby Municipality, near Dörarp in rural southern Sweden.

Burton was thrown through the window of the bus, which fell on top of him. They tried to save him and managed to lift the bus up a little, but before they could retrieve him, the weight of the bus became too much and the bus slipped off the crane and landed on the ground again.
Links: en.wikipedia.org
10,121 views