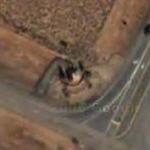 "These two steel beams from the World Trade Center, entrusted to the citizens of Winslow by the City of New York, along with this flag that was flown at the Pentagon, stand as the centerpiece of our Remembrance Garden. The words "United We Stand" remind the world that we will not fear terrorism. We hereby dedicate this Garden to Northern Arizona's promise that 'WE WILL NEVER FORGET'"

The proud, defiant text on the plaque hints that this was erected in the early, heady days of post-9/11 patriotism. Some towns took years to get their 9-11 remembrance act together, but Winslow moved swiftly, securing and transporting the beams from NYC, then erecting them for a dedication on September 11, 2002. The Winslow Chamber of Commerce claims they are the largest debris pieces provided to any town in America.

At the base of one steel beam is another tribute -- we assume it's an ad hoc contribution -- a rock painted as a crude American flag with the words: "USA ROCKS."
Links: www.roadsideamerica.com
924 views