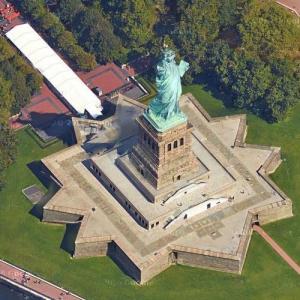 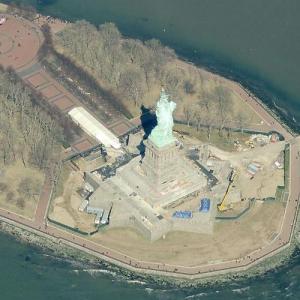 By nic @ 2005-04-10 18:15:12
@ 40.68986593, -74.04439901
New York, New York (NY), US
The Statue of Liberty (French: Statue de la Liberté), officially titled Liberty Enlightening the World (French: la Liberté éclairant le monde), dedicated on October 28, 1886, is a monument commemorating the centennial of the signing of the United States Declaration of Independence, given to the United States by the people of France to represent the friendship between the two countries established during the American Revolution. It represents a woman wearing a stola, a radiant crown and sandals, trampling a broken chain, carrying a torch in her raised right hand and a tabula ansata, where the date of the Declaration of Independence JULY IV MDCCLXXVI[6] is inscribed, in her left arm. Standing on Liberty Island in New York Harbor, it welcomes visitors, immigrants, and returning Americans traveling by ship. Frédéric Auguste Bartholdi sculpted the statue[8] and obtained a U.S. patent for its structure. Maurice Koechlin—chief engineer of Gustave Eiffel's engineering company and designer of the Eiffel Tower—engineered the internal structure. The pedestal was designed by architect Richard Morris Hunt. Eugène Viollet-le-Duc was responsible for the choice of copper in the statue's construction, and for the adoption of the repoussé technique, where a malleable metal is hammered on the reverse side.
Links: en.wikipedia.org, www.history.com
13,624 views