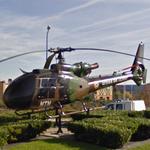 By adrbr @ 2011-10-06 05:39:00
@ 44.039068, 1.382279
Montauban, France (FR)
The Aérospatiale Gazelle is a five-seat light helicopter, powered by a single turbine engine. It was designed and manufactured in France by Sud Aviation (later Aérospatiale). It was also manufactured under licence by Westland Aircraft in the United Kingdom (as the Westland Gazelle), by SOKO in Yugoslavia and ABHCO in Egypt. The Gazelle has been used by several military forces around the world.
Links: en.wikipedia.org
462 views