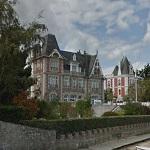 After France surrendered in June 1940, Donitz had U-Boat bases built in Lorient, Brest, St Nazaire and La Pallice/La Rochelle to allow easier access of U-Boats to the Atlantic Ocean. The base at Lorient was crucial to the Battle of the Atlantic and Dönitz considered it the hub. Dönitz moved his HQ there in November, 1940 and setup it up in the Villa Kerillon. The Villa gave him the perfect vantage point to view the construction of the new U-Boat base and enough room to continue his U-Boat missions.
Links: bunkersite.com, www.blavet.co.uk
3,048 views