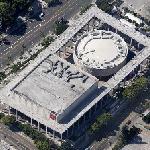 Through the generosity of philanthropist Howard F. Ahmanson, Sr., construction began on March 9, 1962. The theatre opened on April 12, 1967 with a production of More Stately Mansions starring Ingrid Bergman, Arthur Hill, and Colleen Dewhurst. Since then, it has presented a wide variety of dramas, musicals, comedies, and revivals of the classics, including six world premieres of Neil Simon plays and works by Wendy Wasserstein, August Wilson, A.R. Gurney, Terrence McNally, John Guare and Edward Albee. The Ahmanson also has served in the capacity of co-producer for a number of Broadway productions, including Amadeus, Smokey Joe's Cafe, The Most Happy Fella, and The Drowsy Chaperone.

The Ahmanson has the largest theatrical season-ticket subscription base on the West Coast. Its year-round season begins in early fall and lasts through late summer.
Links: en.wikipedia.org
473 views