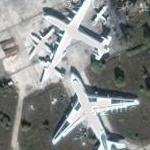 The An-22 first flew in 1965 and was the largest transport in the world at the time.

An-124 was created in the tradition of An-22 to be the largest transport aircraft in the world. It is larger than the C-5B Galaxy, but smaller than the An-225 Mriya (NATO named Cossack) which carries the Russian space shuttle. The first prototype (SSSR 82002, Number 318) flew on December 26, 1982. The wings are high-mounted, swept-back, and tapered with curved tips and negative slant. Four turbofans are mounted on pylons under the wings. The fuselage is a thick oval in cross-section with a rounded nose and tapering to the rear. The tail fin is swept-back and tapered with rounded tips. Flats are swept-back, tapered, and mid-mounted on the body.
2,296 views