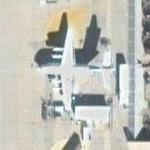 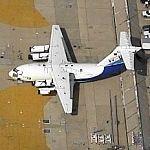 By Parabellum @ 2006-03-12 11:01:18
@ 34.637223, -118.095606
Palmdale, California (CA), US
The YC-15 was McDonnell-Douglas' entry into the USAF's Advanced Medium STOL Transport (AMST) competition, to replace the C-130 Hercules as the USAF's standard STOL tactical transport. The AMST project introduced a number of innovative features, such as under-surface blowing, which used double-slotted flaps to direct part of the jet exhaust downwards, while the rest of the exhaust passed through and downward over the flaps, introducing the Coandă effect.

The YC-15, as well as Boeing's entry into the competition, the YC-14, met or exceeded the specifications of the contest. However, the project was cancelled before either product could be chosen. The YC-15 would see a new life, however, when it was developed into the highly successful C-17 Globemaster III, which included several YC-15 innovations, such as under-surface blowing.

Anonymous
@ 2008-03-05 23:22:34
This is indeed the number one YC-15 and is scheduled to be dismantled and moved to Edwards AFB for display in the Air Force Flight Test Center (AFFTC) Museum. Current plans call for the aircraft to be placed on display adjacent to the new Century Circle just outside the main gate of Edwards.