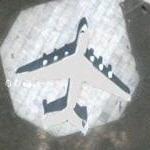 The An-225 was designed for the Soviet space program as a replacement for the Myasishchev VM-T ‘Atlant’. Able to airlift the Energia rocket’s boosters and the Buran space shuttle in captive carry, its mission was almost identical to that of the American Shuttle Carrier Aircraft.

The An-225 is an extension of Antonov’s earlier An-124 ‘Condor’. To meet the needs of its new role, fuselage barrel extensions were added fore and aft of the wings, which received root extensions. Two more Lotarev D-18 turbofan engines were added on the new wing roots, bringing the total to six, and an increased-capacity landing gear system with 32 wheels was designed. The An-124’s rear cargo door and ramp were removed to save weight, and the empennage was changed from a single vertical stabilizer to a twin tail with an oversized horizontal stabilizer. The twin tail was made necessary by the ability to carry external loads, which would disturb the aerodynamics of a conventional tail. Unlike the An-124, the An-225 was not intended for tactical airlifting and is not designed for short-field operation.

Comparison to other larger aircraft.

The 'Spruce Goose' had a longer wing span but was shorter. It also never flew beyond a short test flight.
Links: en.wikipedia.org
15,471 views