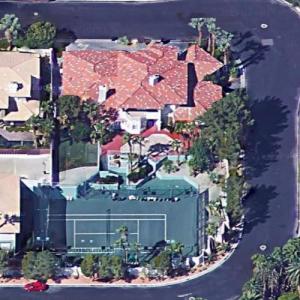 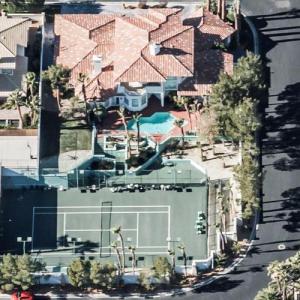 Agassi is an American retired professional tennis player whose career spanned from the late 1980s to the early 2000s. In singles, Agassi is an eight-time Grand Slam champion and a 1996 Olympic gold medalist, and runner-up in seven other Grand Slam tournaments. During the Open Era, Agassi was the first male player to win four Australian Open titles. Agassi is one of five male singles players to achieve the Career Grand Slam in the Open Era and one of eight in history, and the only man to win the Career Golden Slam and the ATP Tour World Championships: a distinction dubbed as a "Career Super Slam" by some.

The home is a huge Las Vegas compound equipped with a Tennis Court for Andre to keep sharp, despite his retirement. Clearly a dream home, Andre lives here with his wife, Steffi Graf, who also boasts a similarly impressive tennis career. Its likely the two often spar on their home court. It’d certainly make a good way to settle an argument for a couple with such prowess.

Agassi turned is one of the greatest players in Tennis history. He turned pro in 1986, and by 1988 he had won more than $2 million in prize money. While on the court, Agassi won over 850 singles matches, including 60 titles, 8 Grand Slams and an Olympic Gold Medal. In 2005, a 35-year-old Agassi managed to make it to the finals of the US, but lost. He retired after losing in the third round the 2006 US Open. Over this impressive career Andre Agassi earned a net worth of $175 Million
Links: en.wikipedia.org
80,183 views