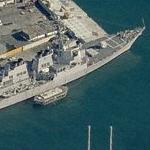 The Arleigh Burke class of guided missile destroyers, one of the destroyer classes of the United States Navy, is built around the Aegis combat system and the SPY-1D multi-function phased array radar. The first ship was commissioned on 4 July 1991. After the decommissioning of the last Spruance-class destroyer, USS Cushing, on September 21, 2005, the Arleigh Burke class ships became the U.S. Navy's only active destroyers.

The class is named for Admiral Arleigh "31-Knot" Burke, the most famous destroyer officer of World War II. Admiral Burke was alive when the class leader was commissioned, and his words to the plankowners echo in the class' distinguished service to date: "This ship is built to fight; you had better know how."

The Japanese Maritime Self-Defense Force operates four modified Flight I vessels as the Kongo class. Three more will be commissioned by 2010, these will be upgraded to Flight IIA standard.
Links: en.wikipedia.org
1,139 views