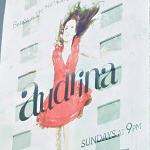 The series was originally supposed to air on MTV, though the network later dropped the show. In October 2010, it was picked up by VH1.
Links: en.wikipedia.org
416 views