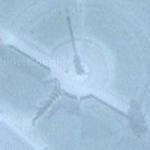 An extraordinary anniversary of the city’s foundation, its 750th jubilee, prompted that the date be marked in a unique and appropriate manner. A contest was announced in 1981, and the winners were three artists from Šiauliai: A.Černiauskas, R.Jurėla and A.Višniūnas.

The symbols of the sun and the archer unite the third one, the time. Hour-counting digits, 12, 3 and 6, are cast into the square floor. The sequence of the digits forms the figure 1236, i.e. the year when the name of Šiauliai was mentioned for the first time.
Links: www.siauliai.lt
3,040 views