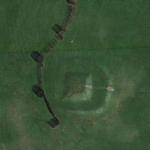 Aztalan is the site of an ancient Mississippian culture settlement that flourished during the 10th to 13th centuries. The indigenous people constructed massive earthwork mounds for religious and political purposes. They were part of a widespread culture with important settlements throughout the Mississippi River valley and its tributaries. Their trading network extended from the Great Lakes to the Gulf Coast, and into the southeast of the present-day United States.
Links: en.wikipedia.org
595 views