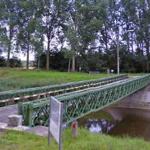 On Oct. 6th 1944 they started construct a Bailey-bridge across the Leopoldcanal between Maldegem and Sint Laureins. A few days later they crossed the canal at the first fase of the so called: "Switchback Operation". The liberation of Zeeuws-Vlaanderen (Netherlands) followed.

This Bailey Bridge is probably one of the last remaining and still used Bailey bridges from World War 2.
Links: en.wikipedia.org
438 views