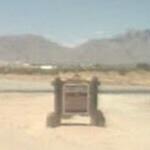 Pat Garrett Murder Site - Pat Garrett, the Lincoln County Sheriff who shot and killed William "Billy the Kid" Bonney at Ft. Sumner in 1881, was himself murdered at a remote site nearby on February 29, 1908. Wayne Brazel, a local cowboy, confessed to shooting Garrett but was acquitted of all charges. The motive and circumstances surrounding Garrett's death are still being debated.