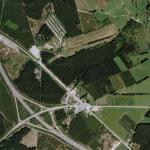 A World War II vintage 105mm howitzer is now displayed here at Baraque de Fraiture, marking the place where fewer than 400 U.S. troops resisted a German Panzer division for three crucial days during the first phase of the Battle of the Bulge.

Here a skeleton headquarters and a bob-tailed, three gun battery of light howitzers, the forlorn remnant of a once potent 589th Field Artillery Battalion, chugged wearily up to the junction under the command of Major Arthur C. Parker III. The battalion's mission was to organize and defend the crossroads when a great wave of Nazi armor and infantry had cracked the Allied Front, reaching north-westward toward the crossings of the Meuse River and the vital port of Antwerp. A dangerous split between the British and American armies was a real possibility.
Links: wikimapia.org
962 views