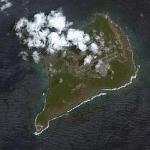 The Japan Maritime Self-Defense Force (JMSDF) operates a naval air base on Iwo Jima. The airstrip has a length of 2650 meters and a width of 60 m. Its orientation is 07/25. The four-letter ICAO code is RJAW and the three-letter IATA code is IWO. The JMSDF is in charge of support, air-traffic control, fuelling, and rescue. The Japan Air Self-Defense Force also utilizes the base. The Japan Ground Self-Defense Force is in charge of explosive-ordinance disposal. The United States Navy also utilizes the base for operations such as nighttime landing practice.
Links: en.wikipedia.org
9,713 views