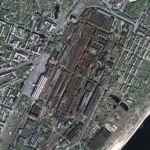 By giove @ 2010-08-06 03:24:19
@ 48.80008, 44.612217
Volgograd, Russian Federation (RU)
from Wikipedia
"After three months of slow advance, the Germans finally reached the river banks, capturing 90% of the ruined city and splitting the remaining Soviet forces into two narrow pockets. Ice floes on the Volga now prevented boats and tugs from supplying the Soviet defenders. Nevertheless, the fighting, especially on the slopes of Mamayev Kurgan and inside the factory area in the northern part of the city, continued as fiercely as ever. The battles for the Red October Steel Factory, the Dzerzhinsky tractor factory and the Barrikady gun factory became world-famous."
Links: en.wikipedia.org
4,011 views

Anonymous
@ 2018-07-24 20:38:20
In Stalingrad the Germans reached the riverbanks where? Downtown at the main landing docks? Was the river reached anywhere in Stalingrad North or South?