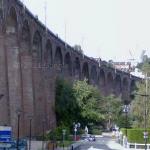 Shortly after it was completed, after several days of heavy rain, the viaduct collapsed on 10 January 1846. The cause of the collapse was never determined. One theory was that it had been filled with ballast before the mortar was dry. Another theory blamed the lime mortar which had been obtained from local sources. Whatever the cause, Brassey rebuilt the viaduct at his own expense, this time using lime of his own choice. The viaduct still stands and is in use today.
Links: en.wikipedia.org
603 views